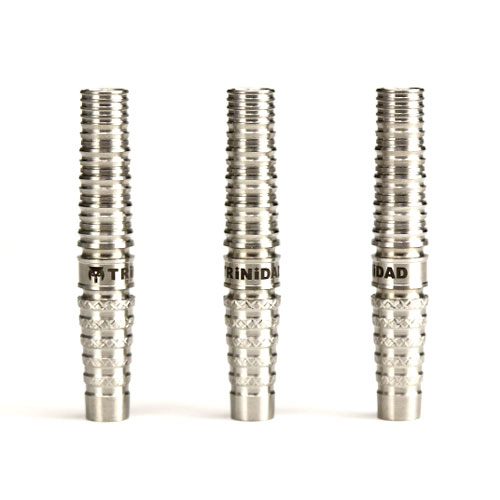 Roman can be thrown effortlessly by swinging the arm lightly without using any excess force. The secret lies in the cut at the gripping area of the barrel.

In the middle of the delta cut, ring cuts were applied to form a large round cut. These individual round cut acts as focal points that allows smooth transfer of energy onto the barrel.

By utilizing these “points”, the dart's ability to be easily pushed to throw has significantly increased, allowing for a strong throw with minimal effort. At the front of the barrel, it consists of net-like cuts that adds additional roughness to the barrel. This section assists well in completing the grip.

The max diameter of this barrel is 7.5mm thick and in order to be thrown with ease, the weight was set at 19g to maximize its potential.

The barrel and its cuts are designed precisely to allow for an effortless throw. It is a barrel that is filled with TRiNiDAD's commitment to quality.