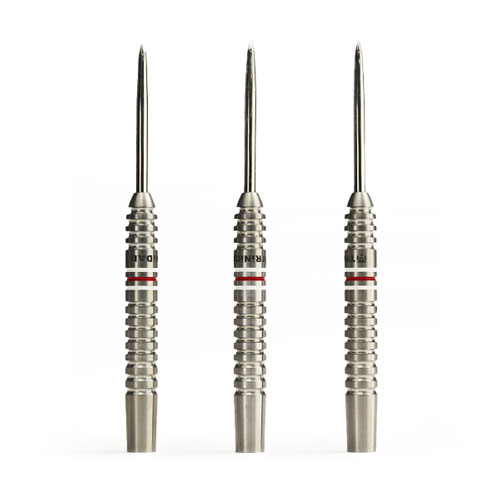 Torpedo for Soft tip, Straight for Steel, the evolution of Gomez onto the next stage.
Balance point of the barrel was calculated precisely to achieve the same feel when throwing either soft or steel.

The newly evolved Gomez varies in shape between soft and steel. By making the balance and weight the same, the same throwing feel is replicated in the newest Gomez. For the steel version, the weight of the darts is at 23g as Yuki Yamada uses 40mm point. For the soft tip, the darts were designed to be also at 23g after attaching the Condor Tip Ultimate. In order to achieve the same center of balance, the front of the barrel was widened to become a torpedo shape for the soft tip version. Despite soft tip and steel tip both being darts, they can be quite different in many ways. Hence, the emphasis was made to achieve the same throwing feel with both the steel and soft tip darts. The 3 ring cuts at the back coming from the taper remain the same from the previous Gomez Type 11. However, in order to add versatility, additional ring cuts have been added in this series. As Yuki Yamada started to utilize the front of the barrel more for the grip, additional ring cuts were placed at the front of the barrel to allow for better control.
Gomez Type 12. Feel the great evolution of the Gomez.