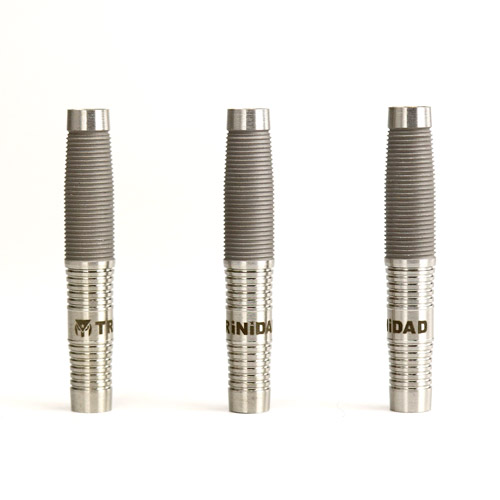 The ultimate fitting cut is comprised of micro delta cut at the main gripping area.

As even this cut was too edgy, the barrel was then sandblasted to produce as slick, yet rough texture.

The area on the barrel that was sandblasted consists of the straight and the tapered section.

By gripping the straight portion, the barrel will feel like throwing a short straight barrel and can be thrown by holding just behind the centre of the barrel.

If gripping by the taper near the back of the barrel, then the dart becomes an all rounder where it can easily be pushed out to throw.

Near the front of the barrel, simple ring cuts were placed along the curve to further assist the fingers that complete the grip.

As for the weight, after many trial and error, the perfect balance of 19.8 gram was found where controllability can be maximized.

As an unorthodox barrel, the barrel suits all throwing styles.

This is a definitely a barrel that is recommended for those that prefer a non-aggressive cut.