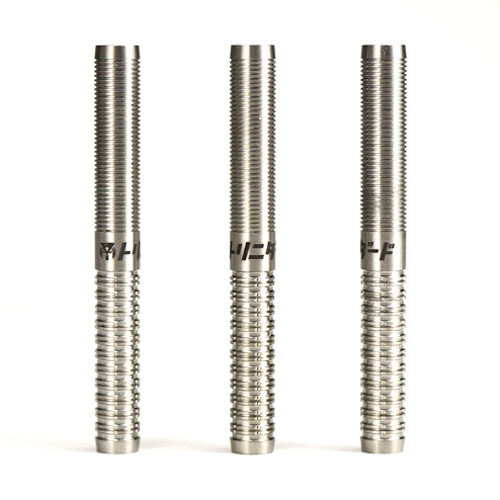 The Classic straight barrel that was updated with improvements to enhance performance at the PDC level.

After obtaining his tour card, Spain's TRiNiDAD player Jose Augusto Olivera de Sousa is one of the hottest players on the tour right now. In order to compete and perform at the highest level, improvements have been made on the barrel to be longer and heavier.

The length of the barrel increased by 14.88 mm up to 55mm and the weight of the barrel was increased by 3g to be set at 18g. The cut of barrel has not been changed and the 2BA version still allows for the barrel to be reversed to use deeper and shallow cut that varies from the front and the back of the barrel depending on the user's condition.

Although the steel version is not reversible, in order to increase the stacking ability of the barrel, strong double ring cuts were applied at the front of the barrel.

By staying relaxed when throwing, this barrel boasts high controllability and provides for a new weapon that can be used to compete at the highest level.