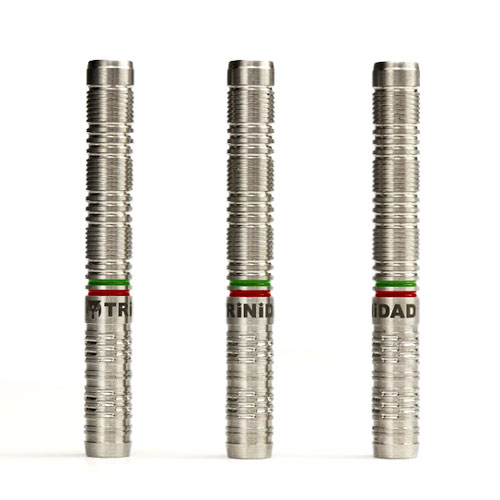 TRiNiDAD PDC PLAYER THE SPECIAL ONE - Jose De Sousa.
Aiming to become the world's top player, enhancements were made in this model to allow for a better grip.

As the PDC 2020 GRANDSLAM Champion and with a PDC Premier League appearance, Jose has already achieved one of the greatest accomplishments by a player associated with a Japanese dart manufacturer.

Jose De Sousa uses 3 point grip by placing his fingers at the front of the barrel. In order to have the dart fit perfectly for Jose, alternating ring cuts and micro ring cuts were placed near where he places the index finger and evenly placed cuts were applied at the thumb area. This enhancement allows for even distribution of grip strength when the dart is held. As Jose does not prefer aggressive barrel design, mild shallow cuts were applied throughout the barrel that will fit snug when held.

From the previous type 2, the steel version's weight was increased by 4g. As soft tip does not require the same weight as steel tip, the length of the barrel was shortened by 5mm to have the weight to be at 18g.

The Special One Jose De Sousa.
As a player contracted by a Japanese manufacturer, will aim to become the world's top player.