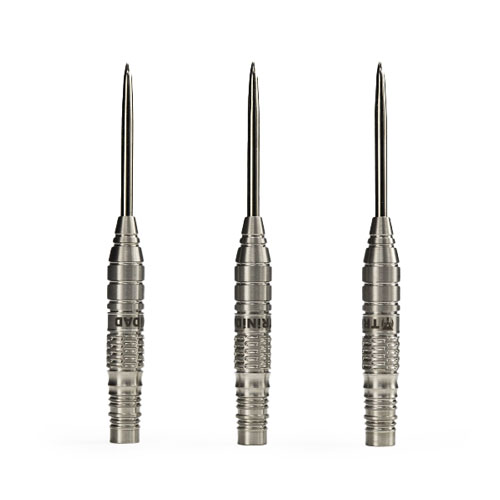 In order to improve the release of the darts as it comes off the fingers, and to be able to throw with minimal effort, improvements were made to this well balanced torpedo barrel.

Compared to the previous version, aggressive triple ring cuts were added and two tiered indents were applied in this model. This indent is one of the key features in this model that contribute towards being able to throw the FLORES TYPE3 effortlessly, and it can also be used as a reference point in completing the grip.

In front of the triple ring cut, the new groove cut that was first applied in the JOSE TYPE3 is also incorporated in the main gripping area of this model. Despite being a less aggressive cut, it provides equal tension when gripped and acts and an exceptional assist.

At the front of the barrel, simple ring cuts were placed. In the steel tip model, the front is curved towards the point to allow for increased grouping.

The balance of the barrel is slightly rear weighted from the center. FLORES TYPE3 is a dart that can be thrown effortlessly and will take flight into the envisioned trajectory.